Spiritual but Not Religious: The Advent of Eastern Religion in Western America 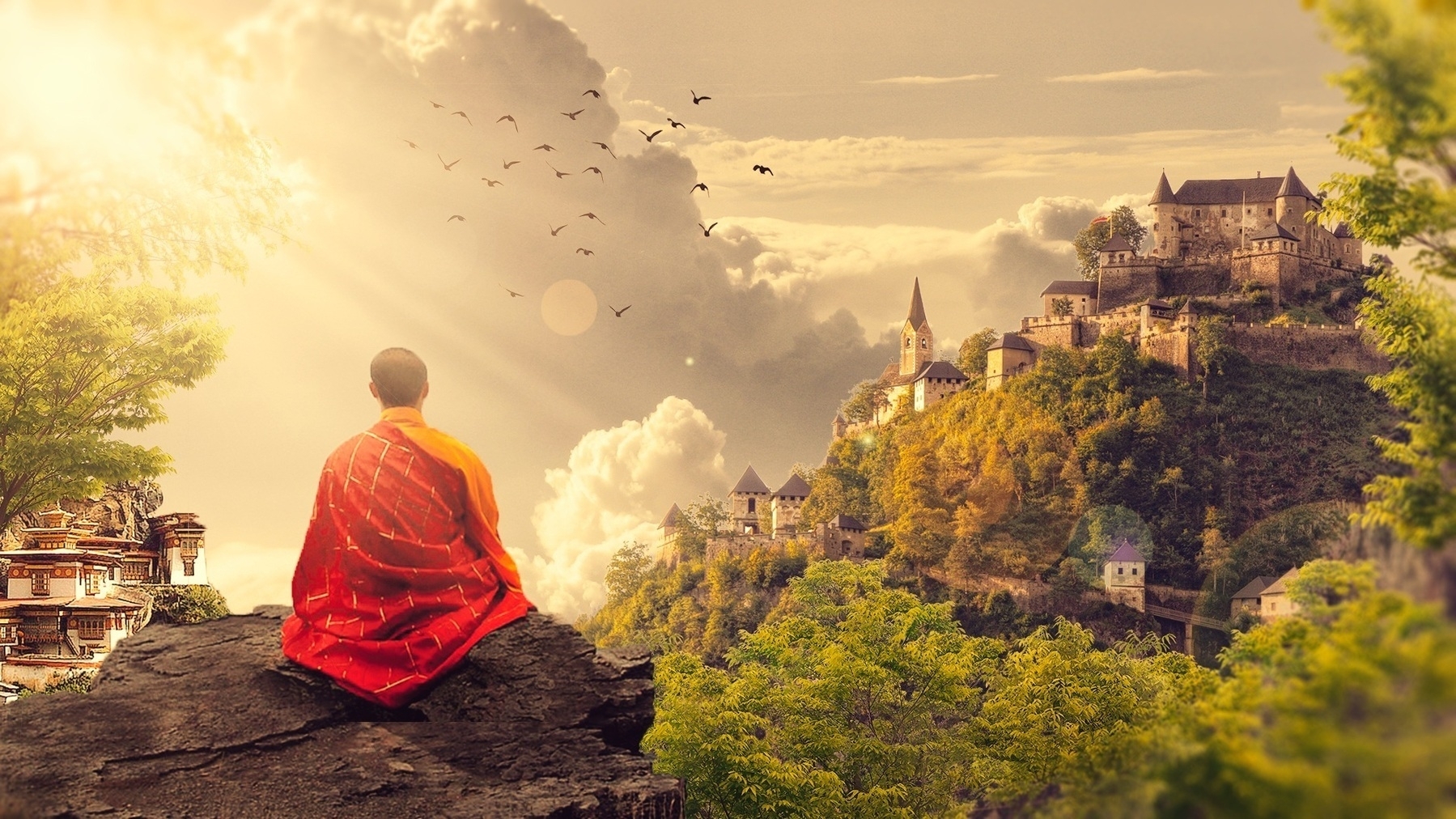 In 2016, Barna Group conducted a survey of U.S. adults over the age of 18 in all 50 states to determine the beliefs of those who state they are “spiritual but not religious.”[1] The results of the research indicate that roughly 11% of the population readily identify with this designation, comprised mostly of Generation X and Baby Boomers. Less than one hundred years ago, such a category did not even exist; people identified with a defined religion or as unbelievers (atheistic or agnostic).

The Barna Group states, “what counts as ‘God’ for the spiritual but not religious is contested among them, and that’s probably just the way they like it. Valuing the freedom to define their own spirituality is what characterizes this segment.”[2] Further, it has become increasingly popular in left-wing political circles to embrace this position and has likely increased since 2016 as the default position of the most vocal of deconstructionists in America. For gospel reasons, Christians need to trace the history of this view so that they might have an answer for those who suggest that Christianity is one among many adequate religions and that one doesn’t need to define their religion to experience unity with God.

Foundations: The Import of Hinduism to America

The implant of Hinduism in American culture can trace its roots to a pivotal speech given by Swami Vivekananda at the Parliament of World Religions held in Chicago in 1893. The setting was the Western world’s first interfaith conference attended by up to 4,000 people.[3] Of significance was the invitation of representatives of Eastern religions, marking what was likely the first introduction to Eastern thought for many Western Americans. According to author Richard Seager, the goal of the Parliament to bring about common religious sentiment for a growing globalized world ultimately failed.[4] But Vivekananda’s speech did sway the thinking of Americans towards religious pluralism.

To the sound of applause, Vivekananda denounced Christianity as a religion that builds prosperity for its adherents at the expense of others’ lives, and that Muslims were currently terrorizing his homeland while at the same time receiving accolades at the very convention they were gathered at.[5] Vivekananda brilliantly crafted accusations against Western and theistic religions, coupled with the open arms of a Hindu calling everyone in attendance, “brothers and sisters,” which captured the attention and affection of the audience.[6] Further speeches included the Hindu ideas of the universal divinity of all humankind and that spiritual practices like meditation were far more important than theological ideas.[7] Also, Vivekananda advocated for a type of pluralism that validated all religions as legitimate paths to realizing an inner divinity. These tenants were later taught across America through Vedanta Societies.[8] Thus, while rightly condemned for the rancid materialism of the West, Americans also received their first taste of spirituality without creed or doctrine. And, if the later success and celebrity status of Vivekananda was any indicator, they liked it.

Early in the 20th century, Paramahansa Yogananda emerged as another Eastern teacher in America, building on the groundwork of Vivekananda. He moved from Bengal, India to the United States to teach forms of yoga through seminars. Later, Yogananda founded the Self-Realization Institute to organize his endeavors and to teach through home correspondence courses.[9] The focus of his teaching was largely pluralistic and indicated that with self-discovery, one can truly understand the great teachers such as Jesus, Buddha, and Krishna.[10]

Interestingly, after his death disputes arose with Yogananda’s students who wanted to teach his principles but apart from the Self-Realization Institute. The organization denied them the right to do so which brought about legal battles and conflict. Zacharias states, “his disciples have each claimed the exclusive rights to teach his inclusive message.”[11] The point is that even in the early days, the import of religious pluralism in America reared the ugly head of inconsistency and self-contradiction as it westernized the Hindu message.

Growth in the ‘60s: The Beatles and Transcendental Meditation

In the fall-out from World War II, the United States emerged as the dominant world power. But internally, war-weary Americans wrestled with the horrors of living in an atomic age, the civil rights movement, the cold war, and brewing counter-communist movements that would inevitably result in more war. Dissension and rebellion became the new milieu of young people; branded the “counterculture,” they began to challenge the authority and hierarchy of the generations who came before. A new liberal ethos that influenced politics, redefined sexual morality, created new arts and music, and rehashed the inclusive religion of Hinduism emerged from this background .[12] These cultural artifacts converge in the phenomenon of the Beatles and their fascination with Transcendental Meditation.

The founder of the Transcendental Meditation Movement (hereafter, “TM”) in America was Maharishi Mahesh Yogi, who brought the movement to the U.S. in the late 1950s. TM purposed to integrate the Hindu concepts of meditation into a western system that provided a means to achieve inner bliss and “Heaven on Earth.”[13] The Beatles met with Maharishi in India in 1968 to learn his methods, which brought fame and countercultural awareness of TM as a method to practice spiritual exercises without committing to any single religious truth.

The idea of spirituality without religion exploded because of the Beatles, and even though they later had a falling out with the Maharishi, the bait was effective as more than five million people in the West claimed to practice TM by 1970.[14] Later, due to skepticism and the aforementioned conflict with the Beatles, Maharishi repackaged TM as a scientifically sound and secular practice to relieve stress and benefit human psychology.[15] Consequently, the TM movement transitioned out of the counterculture and entered the mainstream as an acceptable practice for stress-filled American lives.

Popularity in the ‘80s: Shirley MacLaine and the New Age

In 1983, Shirley MacLaine began to popularize a juxtaposition of ideas and practices that became known to the culture as the New Age movement. According to one author, the origin of this ideology came from 1960s California and was a mix of Buddhist and Hindu practices, including meditation and holistic healing, but also intermixed with such broad practices like witchcraft, astrology, and hypnosis.[16] Later the movement was rebranded with precepts of human potential, self-love, and awareness. In Marilyn Ferguson’s The Aquarian Conspiracy, the author describes the New Age movement as the dawning of a new epoch of human history.[17]

MacLaine emerged as the popular voice of the movement in the 1980s through seminars, books, and several autobiographies. But the height of the effort to establish the New Age philosophy occurred in 1987 with the release of MacLaine’s television series “Out on a Limb” and the media attention given to the so-called Harmonic Convergence where New Ager’s gathered together to usher in a new era of peace.[18] The influence of these impact events of the New Age movement brought Eastern thought from mainstream popularity to widespread acceptance, through the halls of higher education and directly into the household via the medium of television.

The Norm in the ‘90s and Beyond: Oprah and Chopra

Through-out the latter half of the 20th century, Eastern thought and practice began to impact academic disciplines such as the fields of psychology, sociology, history, and even the hard-science of physics.[19] Combined with the rise in New Age popularity in the 1980s, Eastern ideas also captivated popular religious thinking, especially in the worldview philosophies extolled by the queen of daytime television, Oprah Winfrey. Thus, what took American form in the ‘80s became American norm in the ‘90s. The diversity of Oprah’s television guests included New Age practitioners like Marianne Williamson and Eckhart Tolle, and practical advisors like Phil McGraw and Suze Orman; this catapulted her show to become the one-stop-shop for spiritual self-help and individualistic improvement.[20] Given her popularity and fame, the Oprah show demonstrates how the medium becomes the message; pluralistic acceptance of thought becomes a pluralistic ideology.

One of the famous guests interviewed by Oprah was Deepak Chopra, who has authored many books that became successful due to his ties with the show. Although Chopra trained as a medical doctor, the foundation of his religious pluralism came from his study of TM and interaction with Maharishi Mahesh Yogi.[21] Chopra has authored more than eighty books, many of which blend Hindu and Buddhist concepts with ayurvedic medicine, self-help ideas, and even fringe science.[22]

It is these streams of Eastern spiritual ideas blended with the concepts found in self-help and wellness habits that forms the postmodern idea of spirituality without religion, and what explains the success of authors like Deepak Chopra. Furthermore, while suggesting a spiritual framework, the application of postmodern moral teachings is thoroughly materialistic as it presumes the truthfulness of Darwinian evolution. Sire explains:

The New Age worldview is highly syncretistic and eclectic. It borrows from every major worldview. Though its weirder ramifications and stranger dimensions come from Eastern pantheism and ancient animism, its connection with naturalism gives it a better chance to win converts than purer Eastern mysticism. [23]

Through this survey, we have discovered that the philosophy of “spiritual but not religious” is historically rooted in the New Age movement popularized in the 1980s and accepted as normal in the 1990s. Here, everybody wins and there are no ultimate commitments that one must make. But the metaphysical ideas that ground the New Age movement are nothing but “new”; instead, they are derived from ancient Hindu practices that are only relevant in America because of the Western systems they have been attached to by Eastern gurus.

Of chief importance for Christians is the gospel relevance of understanding this history. It is purported that C. S. Lewis said, “at the end of all religious quests one must choose between Hinduism and Christianity; the former absorbs all others and the latter excludes them.”[24] Not only can Christians emphasize the self-defeat of such ideologies (inclusive pluralism excludes the exclusivists) but by demonstrating its history, Christians can show that pluralistic uncommitted spirituality is nothing more or less than repackaged Hinduism. It is indeed a religion after all.

Get the Source Bibliography Here: jbennett.micro.blog/uploads/2…

[15] Walter Martin, The Kingdom of the Cults: The Definitive Work on the Subject, 6th edition (Minneapolis, MN: Bethany House Publishers, 2019), 513.

Posted on: July 15, 2022
In categories: On Modern Religions Research Papers